A.Sankar Rao has attended some of our functions and gave some insight into MGR’s photo sessions like how he likes to be pictured. In his book about our beloved Leader he has said that MGR never gives special photo session, instead he always asks him to take snaps during the shooting.

When I watched Padagotti the images given below to the left is from the movie and right is the still clicked by A.Nagaraj Rao during the shooting. 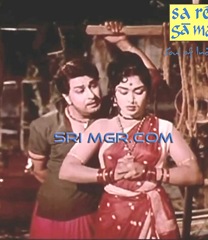 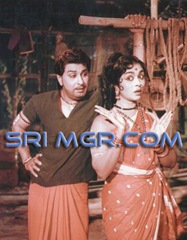 The reaction given by Saroja Devi in the still clicked (right image) does not appear in the movie. And the dialog between MGR and Saroja Devi in this particular shot is very small, 28 seconds. MGR’s left hand never touches the rope in the movie as seen in the image still.

What I feel is that the dialog may be deleted considering the length of the movie or what we see in the film may be a retake.