Our beloved Leader Puratchi Thalaivar MGR’s personal Assistant and one who was in charge of MGR memorial in T.Nagar, Muthu died on 18.8.2011 in Thirubuvanam. He was survived by two sons and two daughters.

Muthu worked with MGR from mid 1960s to 1987. He has lot of informations about our Thalaivar and he has also written two books about him, in that he has narrated some important incidents about MGR. 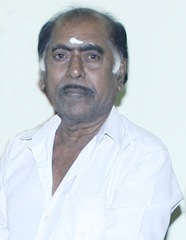 He cared for MGR Fans who visits MGR memorial. He narrates some incidents to the visitors with smile. He was also the first person to show whenever there is any MGR function.

The image was forwarded by Tirupur Ravichandran.

We srimgr.com team prays for his soul to rest in peace.