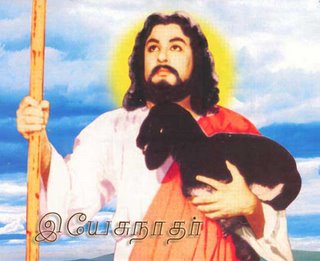 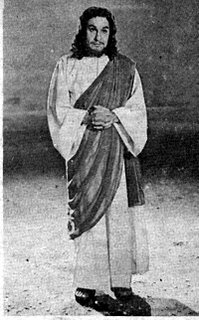 (This is said by Ravindran one of the story writers of MGR.)
In 1970 MGR was about to act in the Film named "Yesunathar" (JESUS CHRIST) a grand opening for the Movie was held then. MGR gave various poses as JESUS. A month or so, the film was dropped because MGR refused to act. The reasons what do you think will be? That MGR got a low deal or his call sheet problem?

When his story writer Ravindran asked MGR why did he turned down the offer, MGR said when he went to some villages he saw his still he posed as Jesus were used for worshiping. That he doesn't like and that is the reason for turning down the offer.

When I read this 10 years back, I was not aware of the fact, daily I have to go pass over a Cycle store there were 3 photos hanging one was his father, and another was Annadurai and one was Jesus with a garland, as I usually go past the shop one day I went near and saw the photo garlanded was not JESUS it was MGR as Jesus. MGR thinking was right. As I mentioned in my previous Blog MGR used to symbol of cross and kept JESUS Idol in his private room.
Roop
Share