The Magic Of MGR

Teacher and translator C.Rajeswari have written 14 books on our beloved Leader Puratchi Thalaivar MGR. Below is the article written by Soma Basu, appeared in English newspaper The Hindu.

We srimgr.com team wishes her best of luck to complete the task of authoring 100 books on MGR.

A little over a year ago, C Rajeswari kick-started a unique project: to write one book a month on former Tamil Nadu Chief Minister, popular film star and a stalwart politician of the Dravidian movement, M.G.Ramachandran. So far, she has penned 14, in Tamil, in a series of 100 that she plans to write. 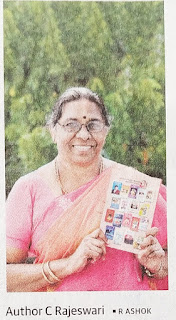 "It will take me eight years to complete," says the Madurai based translator and teacher-turned author.
But her first English title Unique Nature of MGR Fans is slated for launch on September 18 in Chennai. "Non-resident Tamils have established MGR associations in every part of the world. Many do not read Tamil but they want to know more about the cult figure that he was. So, I am writing in English too," she says. For her Tamil series of books, Rajeswari has identified subjects she wants to highlight. "it is not difficult to discover a new thing about MGR each time I meet a fan of his. There is a bit of MGR in each of them," she says, adding, "This is not because I'm a fan myself."

It was at the MGR Ulaga Peravai Manadu in Chennai last year that Rajeswari decided on her compendium. "Even three decades after his death, it is fascinating how much he is loved and revered as a philanthropist, she says. Rajeswari began researching MGR in the 1990s, when she was doing her PhD and was asked to assist Rev CRW David, the head of communications at Tamil Nadu Theological Seminary, Madurai, for his thesis on communicative value of MGR solo songs.

"I collected MGR songs and did the content analysis." Later, when she started teaching Tamil to foreign research scholars in colleges affiliated to Madurai Kamaraj University, she was often asked if Indian actors joined politics only because of their popularity. This made her take a deeper look at Tamil films from the 1940s through to the 1970s. "I found two interesting things. MGR was not a swashbuckling hero, but he was popular for his generosity both in real and reel life. Whatever he did in his movies proved true in some way."

As part of her research, Rajeswari reads books and newspaper articles, watches MGR interviews and meets hundreds of fans from all walks of life, including rickshaw pullers and tea kiosk owners. She even visited the MGR temple in Thiruninravur to understand the mindset of his fans, where she came across 'devotees' who consider MGR deivam (God). They chant his name 108 times as if they were shlokas, and observe 25 days of abstinence from December 24 (the date of his death) to January 17 (his date of birth), at the end of which they visit the temple.

The more people she met including those who worked with him - like his tailor, photographer and personal cook - Rajeswari found MGR's life, behaviour and attitude towards people and work is what set him apart.  The best anecdotes were shared by his three nieces Geetha, Latha and Sudha, and his adopted daughter Radha. They described him as someone who remained popular among the poor, and was friends of the wealthy too, and that he conversed only in Tamil and was passionate about upholding the legacy of Tamil culture and literature, she says.

"His fans love him for his confidence and optimism and also exempt him from being culpable for anything," she adds.
Posted by Roop