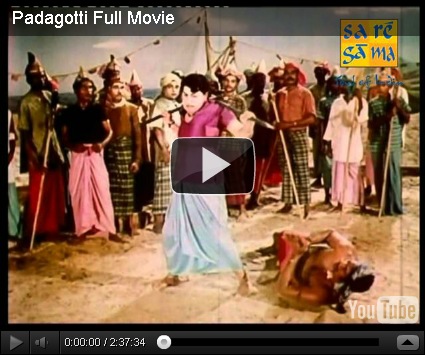 If the above video link does not work click the below video to watch full movie of Padagotti.


Manickam (MGR) is the leader of a small fishing community named Thirukaai Meenavargal. In the same area, Alaiyappan (S.V.Ramadhaas) is the leader of a second group named Sura Meenavargal, in opposition to Manickam’s group.
The enmity between the two groups goes way beyond competition. While Manickam is honest, compassionate and principled, his counterpart, Alaiyappan, is exactly the opposite, driven mainly by greed. Manickam's father main wish was to end the dispute between the two groups, and he persuades them to be friends. However the Sura Meenavargal refuse, and beat him to death. Manickam promises to fulfill his father's wish, and works hard to end the dispute.
The person responsible for fuelling this enmity between the two groups is the man who stands to gain the most from it all – The village Zamindar and Yajaman (M.N.Nambiar). Alaiyappan’s blind allegiance is to the Zamindar.
Manickam soon falls in love with Alaiyappan's daughter Muthazhagi (Saroja Devi), and she shows the same. However, their romance is strongly disapproved of by their communities. Things further escalate when Manickam again goes to Sura Meenavargal to seek peace, and he gets beaten up to his apparent death. Because of this, his men nearly kill Alaiyappan, who is then saved by a mysterious old man. Thankful to the old man, Alaiyappan allows him to stay for the night at his home. Muthazhagi later realizes the old man is actually Manickam in disguise, but keeps it a secret from everyone.
One day, it is a boat race between the two communities. But Manickam (still in disguise) chooses to go with Sura Meenavargal, and they eventually win the race. However, his fake beard falls down after the race, and everyone recognizes him as Manickam. The Thirukaai Meenavargal, enraged for his betrayal, forces him to leave Muthazhagi.
When Alaiyappan suddenly goes bankrupt, zamindar agrees to help him, but wants to be married to Muthazhagi in return. Alaiyappan, initially hesitant, later agrees but Muthazhagi is not ready. She is kept custody at the zamindar's mansion and is unable to escape, even Manickam (in a new disguise) is unable to save her. But the zamindar's wife (Jayanthi) secretly helps Muthazhagi out of the mansion. However, the former gets caught in the act by the zamindar, who then kills her. He begins to chase Muthazhagi, but is cornered by Manickam with whom he starts a battle. Shortly later, the local police arrive and arrest the zamindar, because they witnessed him killing his own wife. With both the communities finally reconciling, Alaiyappan agress for Muthazhagi and Manickam to be married.
Cast:
MGR – Manickam
Sarojadevi – Muthazhagi
M.N.Nambiyar – Neelamegam
Asokan – Neelamegam’s henchman
Nagesh – Leader of Fishermen Society (comic role as a Leader)
Songs:
The movie has 8 mesmerizing songs tuned by M.S.Visvanathan and Ramamurthy. All the songs are penned by Vaali.
The songs are:
1. Tharaimel Pirakka vaithan (MGR Philosophical song)
2. Ennai Eduthu Thanai Koduthu
3. Thottal Poo Malarum (Duet song)
4. Koduthellam Koduthaan (MGR Philosophical song)
5. Azhagu Oru Ragam
6. Naan Oru Kuzhandhai Nee Oru Kuzhandhai (MGR in disguise, song)
7. Paatukku Patteduthu
8. Kalyana Ponnu Kannana Kannu (another song for MGR in disguise)